In 2020 the world economy suffered the disastrous effects of the Covid-19 pandemic, as evidenced by the fall in the global GDP that dropped by 3.9%. The crisis concerned both the industrialised (-5.1%) and the emerging countries (-3%), with the only exception of China.

International trade, considered as the engine of the global growth over the last decades, highlighted a considerable contraction (-6.9%, after -0.3% in 2019); the exchanges of manufactured products also decreased, accounting for 6.7% (versus -0.1% in 2019).

In 2020, Italian economy, shrank significantly (-8.9%), however achieving a better performance than some other important European countries, such as Spain and the United Kingdom. The quarterly analysis of its GDP trend changes shows that the crisis started in the first quarter (-5.8%), reached the lowest point in the second quarter (-18.2%), had a weaker decrease in the period July-September (-5.2%). In the last part of the year, with the second wave of the pandemic, the crisis worsened again (-6.6%).

Investments represented the weakest component of domestic demand (-9.1%). Investments in building and construction (-6.3%) had a better performance than those in machinery and equipment (-12.1%). There was a remarkable reduction in household consumption (-10.7%), whereas public spending went up (+1.6%).

In 2020, the Italian production of machine tools, robots and automation systems amounted to 5,182 million euro, reporting a 20.4% downturn versus 2019.

The negative performance of the Italian industry of the sector affected the utilisation rate of production capacity, whose yearly average decreased significantly, changing from 82.4% in 2019 to 65% in 2020. 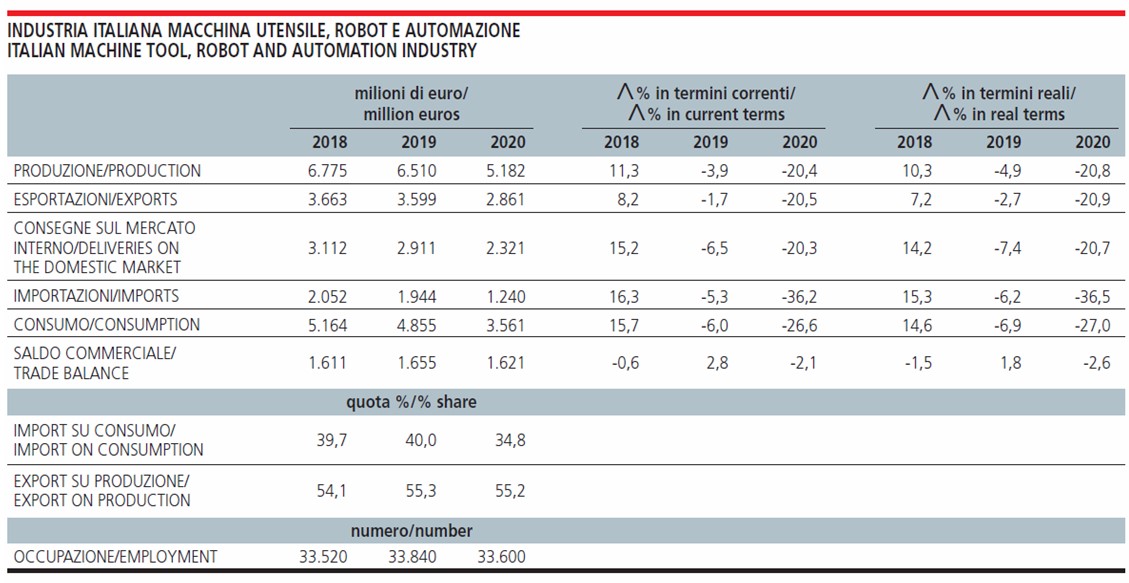 In 2020, Italian exports of machine tools dropped (-22%) to an amount of 2,625 million euro: for the first time in ten years, they decreased below 3 billion euro. The quarterly trend was particularly negative in the first part of the year (-17.9% in the first quarter, -44.8% in the second quarter); the fall was smaller in the third quarter (-16%) and even smaller in the fourth quarter (-8.4%).

There was only a moderate decrease in the sales to the rest of the European continent (-7.3%) for an amountof 304 million euro. In detail, a growth was reported in the exports to Turkey (100 million euro, +29%), one of the few markets showing an opposite trend. Exports to Russia stood at 100 million euro (-16%), registering a better performance than in Switzerland (54 million euro, -23.8%).

Exports to Asia, second area of destination for the Made by Italians, went down (-28.9%), totalling 485 million euro.

East Asia absorbed the largest share of total exports to the continent, importing Italian machine tools for an amount of 296 million euro, (-25.5% versus 2019). 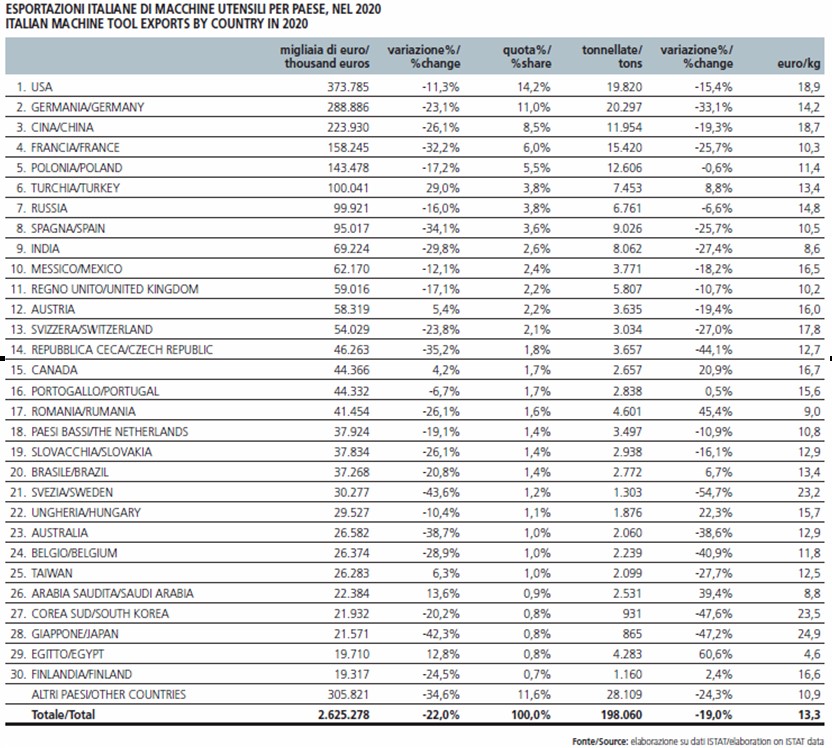 The structural characteristics of the Italian machine tool, robot and automation manufacturing industry are the same as those observed within the national production system: small-sized enterprises, high propensity to export, and high-quality product offering.

According to the survey conducted by UCIMU-SISTEMI PER PRODURRE, in 2019 (the year to which the latest data are referred), 54,6% of machine tool manufacturing enterprises invoiced less than 12.5 million euro and 62.8% of them employed less than 100 people.

The geographic distribution of the sector was consistent with that of the Italian production system, proving that it is essential for machine tool manufacturing companies to be close to the enterprises of their customers and suppliers: the largest part of the sector production facilities are in Lombardy (44.6%), Triveneto (21.7%), Emilia-Romagna (19.3%) and Piedmont (10.8%). To the total turnover, Lombardy contributed 42.3%, Triveneto 20.4%, Emilia-Romagna 18% and Piedmont 17.9%. The companies from Emilia Romagna showed the highest propensity to export, (corresponding to 61.7% versus a sector average of 57.1%). The main user industry of machine tools was that of metal products (44%) - which includes production and first processing of metals, subcontractors, building and construction components and other products different from machinery - followed by the automotive industry (21.9%).

Lombardy and Piedmont are the regions with the highest density of companies operating in the robotics market, respectively with 36.5% and 30.8% of the enterprises. Again, Piedmont had the highest turnover percentage (51.3%) and the highest number of employees (63.8%).

In order to analyse the trend of the world machine tool industry,UCIMU-SISTEMI PER PRODURRE refers to the information made available by the national associations, to the international sector rankings processed by Gardner Publications and to the official foreign trade data. For almost all observed countries, the data concerning local production of machine tools are available; in the remaining cases, production is indicated as “zero” in the world tables:for the same reason,the consumption figure indicated concides with that ofnet imports, since is not possible to quantify the value of deliveries by local manufactures on the domestic market. 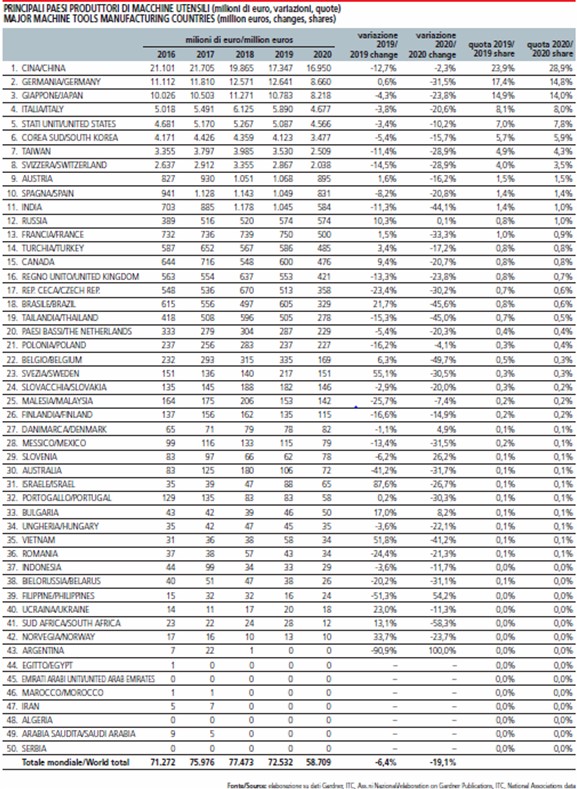 The world consumption (TABLE 9) went down versus 2019 (-19.5%), amounting to 57,400 million euro. The Asian market absorbed 53.8% of global sales, whereas the European market covered 28% and the American market acquired 17%. Other areas (Africa and Australia) took up the remaining 1% share. 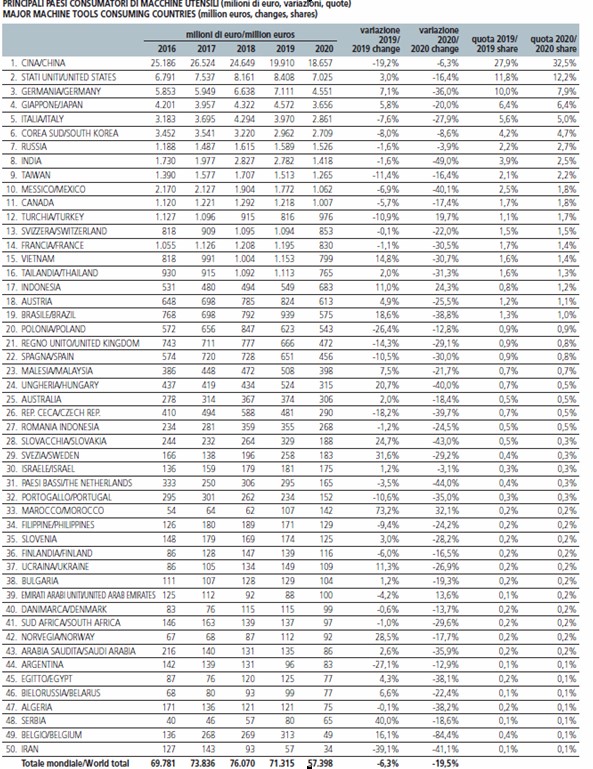 China confirmed its world leadership also in 2020. The Asian Giant was the first manufacturing country (16,950 million euro, -2.3%) and the largest consumer (18,657 million euro, -6.3%), well outpacing all other countries, despite another year of fall. The consumption share covered by imports decreased to 28%, for a value of 5,227 million euro (-19.7%). Exports dropped (-10.8%) to 3,520 million euro, but China defended its third place in the world ranking of exporting countries.

German manufacturers kept their positions, despite registering remarkable decreases for all main economic indicators. Production, amounting to 8,660 million euro (-31.5%), enabled Germany to maintain its second place in the world ranking. Despite a significant decline, (-30.7%) accounting for 5,802 million euro, the country confirmed its top position in the export ranking. Analogously, although there was a strong reduction in its domestic demand, down to 4,551 million euro, Germany kept its third place in the consumption ranking. The German market ranked third also with regard to imports of machines from abroad: its import/consumption ratio stood at 37% and the value of imports amounted to 1,693 million euro.

Japan confirmed its third place in the ranking of manufacturing countries, with a value of 8,218 million euro, down by 23.8%. Although it recorded a downturn in its sales abroad (-27.7%) that was higher than the world average, the Land of the Rising Sun maintained its second place among exporting countries, totalling 5,131 million euro. A considerable reduction was registered also with regard to Japanese consumption (-20%) down to 3,656 million euro. The country was the fourth world market in the consumption ranking. The market penetration of foreign machines was again very reduced: only 569 million euro, corresponding to 16% of the market.

With an output of 4,566 million euro (-10.2%), the United States ranked fifth among machine tool manufacturing countries, a position they already had in 2019. Among the leading countries, the USA highlighted the highest import penetration, corresponding to 58%: their purchases abroad amounted to 4,103 million euro, which ensured the country’s second place in the ranking of importing countries, after China. Even with regard to consumption, the US market confirmed to be the second largest, with 7,025 million euro (-16.4%).

The downturn of its domestic demand (-8.6%), which resulted smaller than that expressed by its competitors, allowed the country to reach the sixth position in the world consumption ranking, with 2,709 million euro. Imports covered 29% of the market.

Taiwan showed a strong fall in production, (-28.9%), totalling a value of 2,509 million euro. A similar trend was observed in relation to exports, (-34.3%): the value of 1,800 million euro ensured the country’s fifth place in the world ranking.

Machine tool production in Switzerland decreased to 2,038 million euro (-28.9%). An 81% share of the machines was exported, for a total of 1,654 million euro, which confirmed the country’s sixth place in the ranking of world exporting countries.

In 2020, Russia went up to seventh place in the ranking of markets, with a machine tool consumption of 1,526 million euro (-3.9%). Imports decreased by 6.6% to 1,019 million euro, whereas local production remained stable at 574 million euro. Propensity to import stood at 67%. India went down to eighth place among consumer countries, with 1,418 million euro (-49%). A very heavy fall was reported both in national production (-44.1%) and imports (-51.8%). With 908 million euro, the Asian country registered the seventh import value worldwide in 2020.

In 2020, the Turkish market highlighted a growth (+19.7%) to 976 million euro, an outcome that ensured the country’s twelfth place in the global consumption ranking. The particular time dynamics of the pandemic spread and the trend of the exchange rate were at the base of this trend, which was against the prevailing tendency. We should mention that in 2020, Turkey showed an opposite trend after three consecutive years of reduction in the demand for machine tools.

In 2020, with a value of 830 million euro (-30.5%), France lost positions compared with the previous year, becoming the fourteenth world market and the fourth one in Western Europe. Domestic production remained weak (500 million euro) and imports covered 90% of the demand. 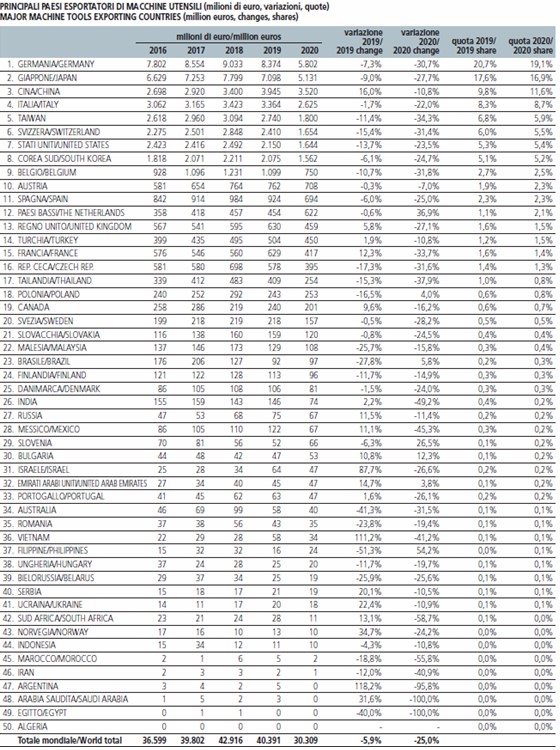