The topics of digitization and sustainability will characterize the next edition of BI-MU and Xylexpo, the events organized by UCIMU-SISTEMI PER PRODURRE, the association of Italian manufacturers of machine tools, robots and automation, and by Acimall, the association of woodworking machinery manufacturers, to be held from 12 to 15 October 2022 in the fieramilano-Rho expo center. 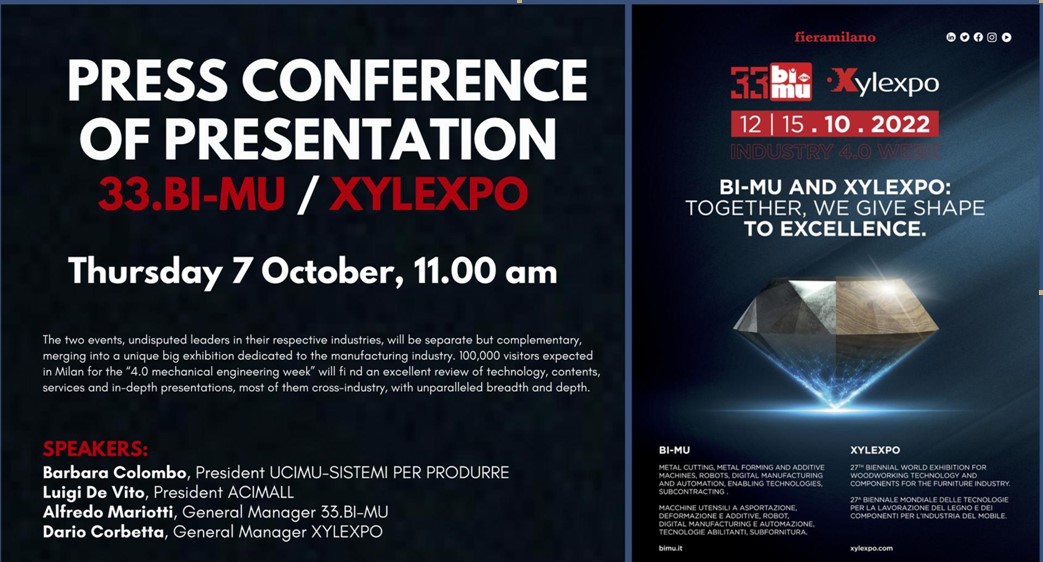 The contents of the events dedicated to manufacturing technologies were presented today in Milan, to industry operators and journalists, as part of a meeting that took place during EMO, the world exhibition dedicated to the metalworking business, currently hosted in the exhibition halls. 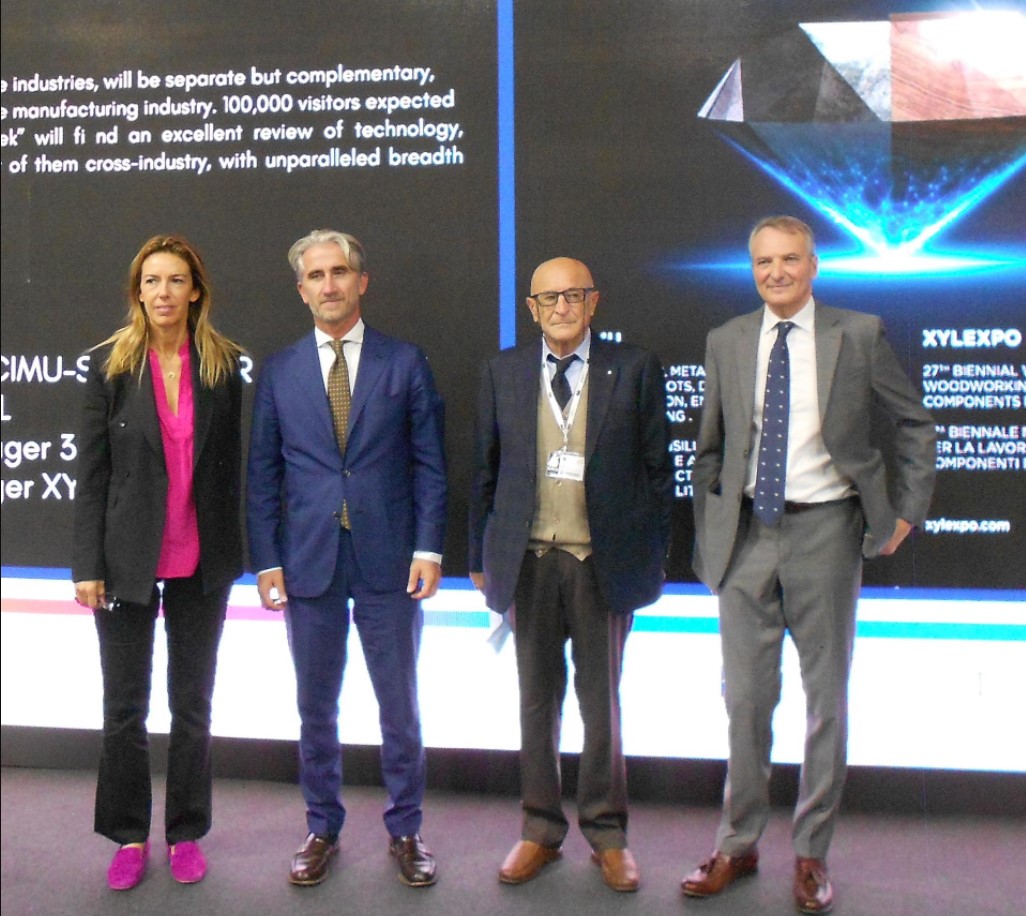 The two events – 33.BI-MU (biennial exhibition of machine tools, robotics and automation, additive manufacturing, digital and auxiliary technologies) and Xylexpo (biennial exhibition of processing technologies for wood and components for the furniture industry) – will cover eight halls in the West area of the fieramilano-Rho district. Halls 9, 11, 13 and 15 will be assigned BI-MU; halls 14, 18, 22 and 24 to Xylexpo.

According to the trend of the pandemic and considering the highly favorable economic context, as shown by all key macroeconomic indexes, it is reasonable to expect that Xylexpo and 33.BI-MU will mark the complete "return to normal", after the inevitable and necessary measures that have led to the cancellation of many events with a heavy impact on the exhibition calendar.

A "PREMIUM" EVENT BI-MU and Xylexpo, two distinct but complementary events merged into a single large container where operators from all over the world will find technologies, equipment, services and ideas to produce in an increasingly sustainable and efficient way, according to the principles of "Industry 4.0". 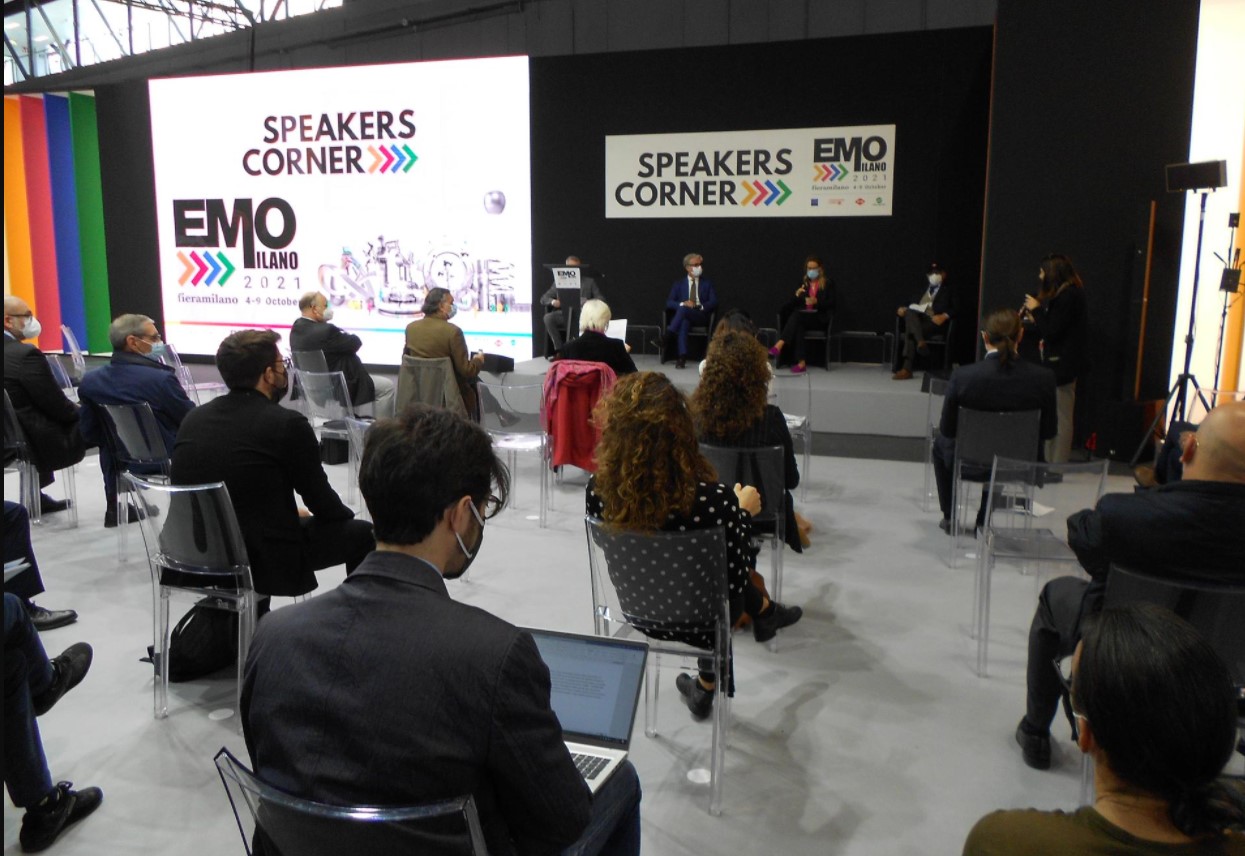 BI-MU and Xylexpo together will give life to the week of instrumental mechanics, attracting to fieramilano-Rho all manufacturing industry operators who will be able to combine the visit to both exhibitions with a single trip.

The stars of the events will be the most advanced technologies that, without neglecting all the related sectors, will show the evolution of production systems, their progressive integration, the constant involvement of different and complementary materials, including light alloys, composites, aluminum. Four days that will attract technicians, entrepreneurs, opinion leaders and operators from all over the world to Milan, especially from those countries where the demand for "4.0" solutions is higher, solutions that are automatic, flexible, effective, and at the same time, empower an effective management of energy and resources thanks to increasingly "friendly" digital systems.

From this edition, the exhibition enters a new digital dimension that, through a dedicated platform, will further extend its geographical and time boundaries.

More than positive the early reactions of the exhibiting companies involved, who have immediately seized the new opportunities that arise from the simultaneity and full collaboration between the two events, which will be promoted through an even more effective communication campaign all over the world, starting in the coming weeks.

Barbara Colombo, president of UCIMU-SISTEMI PER PRODURRE commented: "In the recent weeks, we have updated the 2021 forecasts for the industry. The data processed by Centro Studi & Cultura di Impresa of UCIMU-SISTEMI PER PRODURRE tell us that we are cruising at twice the speed estimated only a few months ago. And the data for Q3 2021, just processed, indicate an increase by 52 percent compared to the same period of last year, thus confirming that the positive trend will continue throughout 2022. Government incentives are supporting domestic demand and will keep doing next year to the benefit of 33.BI-MU."

"Technologies for the wood and furniture industry are experiencing an extremely positive season," commented Luigi De Vito, president of Acimall. "If the figures relating to the first part of the year are confirmed in the coming months, it is reasonable to believe that in 2022 the world of Italian technologies for wood-furniture will record a double-digit growth in production, approaching the threshold of 3 billion euro, two of which from export". "Such trend will be reflected in Xylexpo that, once again, will be a great international showcase of innovation, the world reference in even-numbered years, a not-to-be-missed event not only because it takes place in a market - Italy - highly attractive both in terms of quantity and quality of demand, but because it has always been a key meeting point for industry operators from all over the world". 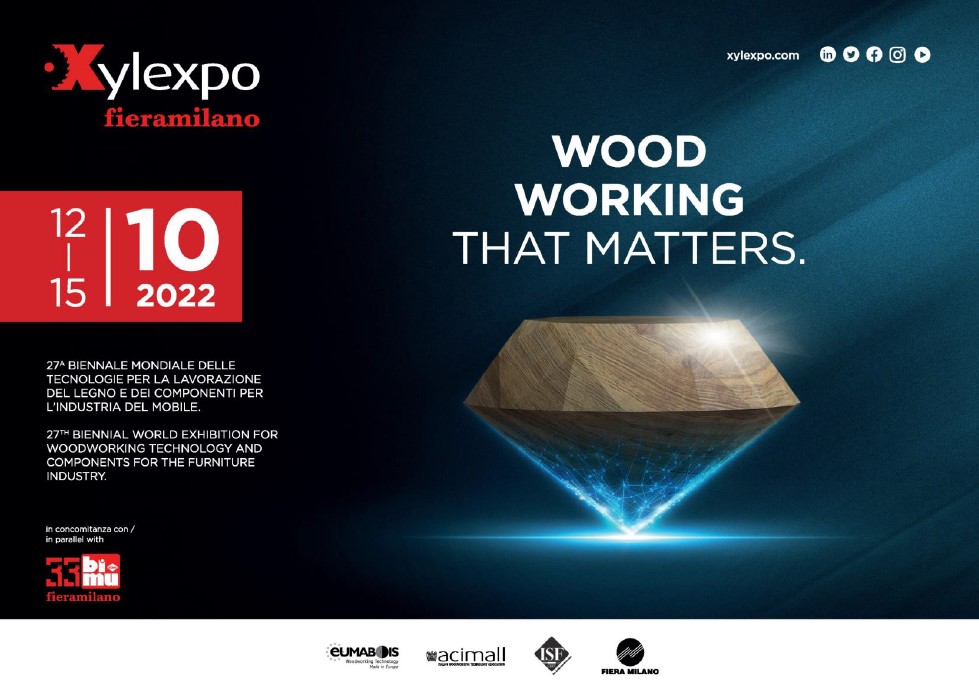 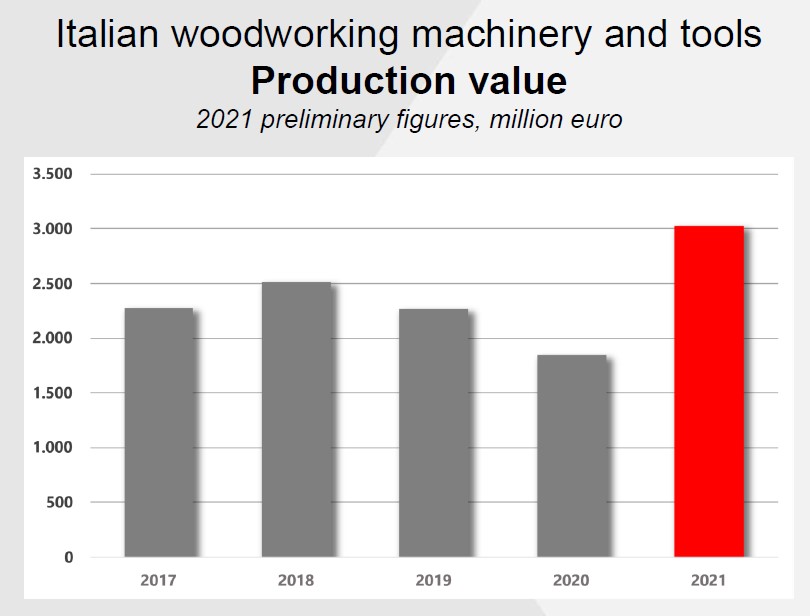 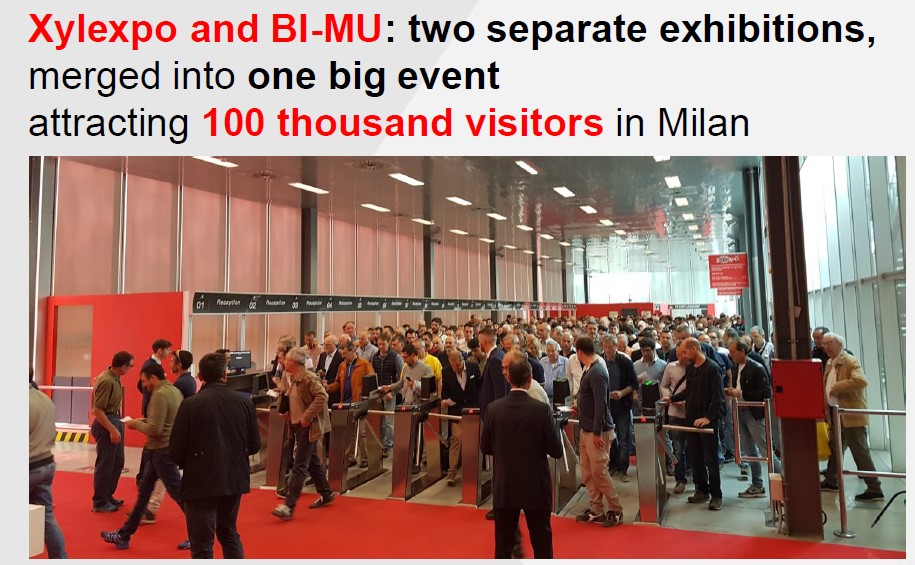 Alfredo Mariotti, general manager of UCIMU-SISTEMI PER PRODURRE, said: "The participation of industry operators in EMO MILANO 2021, the world-leading industry exhibition currently hosted at fieramilano-Rho, is further evidence of the excellent moment that the market is experiencing. This positive situation, together with the numerous innovations that will characterize 33.BI-MU, starting with "RobotHeart",the new area dedicated to robotics, will certainly attract the interest of exhibitors, a hundred of whom have already confirmed their participation, booking a total area of appoximately 12 thousand square meters".

Dario Corbetta, director of Acimall, then took the floor, adding: "There are a hundred companies that have long confirmed their participation, 10 thousand square meters of exhibition space assigned already in the aftermath of the cancellation of the 2020 edition, and by the end of the year we expect a massive increase in both exhibitors and exhibition area. We will achieve this result thanks to the levers on which a trade association can act, having no other objectives than the promotion of the sector it represents, including the "early bird" rates for those who register by December 31st or the decision to keep the participation costs unchanged."

Many events, seminars and collateral initiatives will be deployed by the two organizers, offering opportunities for in-depth analysis and discussion on the most current topics of industrial production.

Alongside the shared paths between 33.BI-MU and Xylexpo, there will be specific initiatives in the programs of each fair.

Xylexpo is renewing the appointment with "Xia-Xylexpo Innovation Awards", that in 2022 will reward the commitment to "sustainable business" ("Green Award") and the development of digital solutions and structures ("Digital Award"). A specific award will go to the best technologies for the production of furniture with a special design content ("Design Award").

Xylexpo will also dedicate three exhibition days to as many topics of woodworking, through events and technological routes that will put specific segments of the production process under the spotlight. On Wednesday, October 12, the topic will be panel processing, Thursday 13 will be dedicated to surface finishing, Friday 14 to processes from sawmill to semi-finished material production.

According to tradition, the 33rd edition of BI-MU will present some new initiatives. Among these, a special mention goes to "RobotHeart", the new exhibition area dedicated to industrial robotics, automation, related technologies, components, systems, sensors and artificial intelligence, which are increasingly adopted in several industries: from machine tools to mechanical engineering, from electronics to automotive, from food & beverage to pharmaceuticals, from logistics to packaging, from biomedical to cosmetics, all these industries will be extensively represented among the ranks of visitors.

The stars of the exhibition will be manufacturers, integrators, universities and representatives of the academic and research world, spin-offs and start-ups, all the facets of a sector that currently plays a key role in the development of the competitiveness of the industrial system. The variety of actors involved is the distinctive feature of this project, which is not "just" a trade fair but also wants to be a laboratory of ideas, a place of cultural production and knowledge sharing, to the benefit of all those who work in the sector.

In addition to the replay of "BI-MUpiù", the arena dedicated to in-depth discussions of specific topics, and "BI-MUpiù Additive", the area dedicated to the world of additive manufacturing, the event will present some special initiatives that will be introduced in the coming weeks.