Schopfloch, May 6, 2021. In light of the corona pandemic, the annual general meeting of HOMAG Group AG was held virtually for the second time. Approximately 86 percent of the share capital was represented. 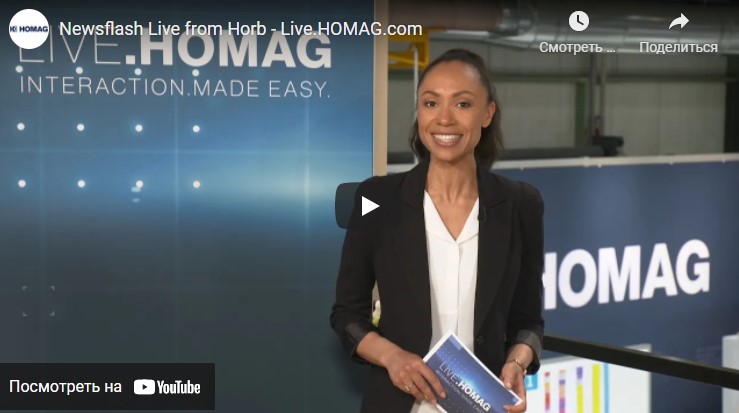 In his speech, CEO Ralf W. Dieter looked back on the fiscal year 2020, which was marked to a significant extent by the corona pandemic at the HOMAG Group as well. He emphasized that despite all the challenges, the HOMAG Group was able to achieve an operating EBIT of EUR 27 million. Dieter pointed out that the strategic development of the company was continued also during the pandemic and the course had been set for profitable growth. As examples, he cited the complete takeover of the long-term sales joint venture HOMAG China Golden Field as well as the development of the new solid wood business unit, which has been strengthened by two acquisitions. The CEO was confident about the prospects of the current fiscal year and expects an increase in incoming orders, sales and EBIT margin.

This press release contains certain statements relating to the future. Future oriented statements are all those statements that do not pertain to historical facts and events or expressions pertaining to the future such as “believes”, “estimates”, “assumes”, “forecasts”, “intend”, “may”, “will”, “should” or similar expressions. Such future-oriented statements are subject to risks and uncertainty since they relate to future events and are based on current assumptions of the Company, which may not occur in the future or may not occur in the anticipated form. The Company points out that such future-oriented statements do not guarantee the future; actual results including the financial position and the profitability of the HOMAG Group as well as the development of economic and regulatory framework conditions may deviate significantly (and prove unfavorable) from what is expressly or implicitly assumed or described in these statements. Even if the actual results of the HOMAG Group including the financial position and profitability as well as the economic and regulatory framework conditions should coincide with the future-oriented statements in this press release, it cannot be guaranteed that the same will hold true in the future.