Following two years of construction, Japanese technology group Yaskawa has now opened its new robot production facility with European robotics development centre at Kočevje/Slovenia. Yaskawa already started European production of its Motoman robots at the end of 2018. The investment volume is about 25 million euros. The new plant supplements the existing production facilities in Japan and China and will satisfy about 80% of the European demand for Motoman robots. 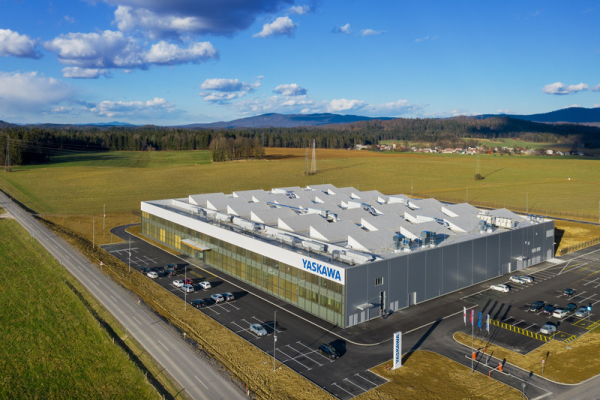 At the official opening ceremony on 8 April a total of 13 representatives of the Yaskawa management and politics cut the ribbon to inaugurate the company’s first European robot manufacturing facility. The approx. 300 invited guests included Slovenian Prime Minister Marjan Sarec, EU Commissioner for Transport Violeta Bulc and other celebrities from Slovenia and all over Europe. “Slovenia and Japan are bound by a long tradition of economic cooperation. I am convinced that this factory will further strengthen our cooperation in future,” said Prime Minister Sarec in Kočevje and promised: “We will do our best to ensure that Slovenia remains an attractive investment location.”

With the new – worldwide third – production facility for Motoman industrial robots Yaskawa is reacting to the sharp rise in demand in Europe and the EMEA region. In his opening address Masahiro Ogawa, Executive Officer of YASKAWA Electric Corp. and General Manager Robotics Division, explained: “Our goal is to shorten supply chains and delivery times, to enable us to react faster to regional market requirements and our customers’ wishes – not only with the new plant, but also with a major European robotics development centre.” Bruno Schnekenburger, CEO & President of YASKAWA Europe, added: “With this investment we want to further strengthen direct contacts to customers in Europe and work even more closely on the path to Industrie 4.0, not least through first-class customer service.” 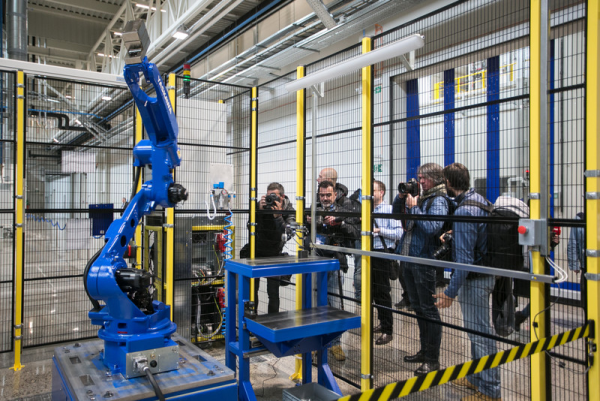 High demands for sustainability and efficiency

The robots to be manufactured in Kočevje will for the main part be the current Motoman GP series with a payload of 7 to 225 kg. The GP series includes compact and extremely efficient handling robots for high-speed joining, packaging and general handling applications. “GP” stands for “General Purpose“, also for diverse applications. The 6-axis robots are thus true productivity drivers.
On a total gross area of over 12,000 m², of which 10,000 m² are for production, the new factory building offers capacity for the manufacture of up to 10,000 Motoman robots per year. Furthermore, up to 150 new jobs are to be created step-by-step, about 10% thereof in the development department.
The new building, designed by the Slovenian architects’ office Andrej Kalamar, fulfils stringent requirements regarding sustainability and efficiency. The prerequisites for this were created in the planning phase with a software-supported simulation of the building in the form of a ‘digital twin’. The “Building Information Modelling” method – abbreviated to BIM – was used for the coordinated planning of the whole building with all parallel works, and simulated in the virtual digital model prior to the start of construction, then tested and corrected as needed.

Commitment to the location ‘Europe’

Yaskawa – with over 430,000 installed units one of the largest global players in the field of industrial robots and a leading international supplier of drive, automation and control technology, as well as components for the generation of alternative energy – is pursuing an ambitious expansion strategy in Europe. “Current investments in Slovenia, similar to those recently made in Germany, France and Sweden, constitute a strategic element of the Europe initiative of the Yaskawa Group, as anchored in our global corporate goals ‘Vision 2025’ ” says Manfred Stern, Regional Head Yaskawa Europe. In relocating its technological know-how and production competence from Asia to Europe, the company, founded in 1915, is consciously acting against the international trend.
Employing a workforce of over 1,900 at various European locations, YASKAWA Europe GmbH with head office in Eschborn, Germany, recently generated annual sales exceeding 600 million euros. Approx. 300 people are currently employed at Yaskawa’s European Robotics Division, whose headquarters are located at Allershausen near Munich. Yaskawa has maintained its own subsidiary in Slovenia since 1990.